I could see stars past the glow of the navigation system. The serenity of my top deck perch and the gentle lilt of my hammock haphazardly strung to the poles suggested I take a quick nap. It was a little difficult, given the occasional interruptions of the bla-bla-blare of fake foghorns and the “brrat-brrat” coming from the bottom deck. Apparently I was trying to sleep through the party.

A great journey lies immediately ahead of me. Amelia, Margot (a friend of Amelia’s and local artist/chiller/foo’/community leader) and I have embarked on a mail boat, the slow vessels that carry mail to the Bahamian Family Islands (i.e. not Nassau – they used to be called the “Out Islands” but the Ministry of Tourism changed the terms around when they started to promote development sites off Nassau) to visit Cat Island. The trip will be over 16 hours in total, given a late departure from the dock. (We took advantage of the delay to get some beers and conch salad on the pier.) It’s a charter to get Nassuvians to the Rake & Scrape festival on Cat, one of the bigger celebrations aside from Junkanoo.

The boat is packed with people and cars, there’s a makeshift bar and a DJ set haphazardly set up on the car loading deck (we’re transporting all the sound equipment for the festival…it got loud very quickly). After a few rounds of lessons from a friend made on the boat, I am now a fan of Dominos, although still bad at it. You’re supposed to declare your move by slamming your piece on the table, but every time I do I just scatter the entire board. 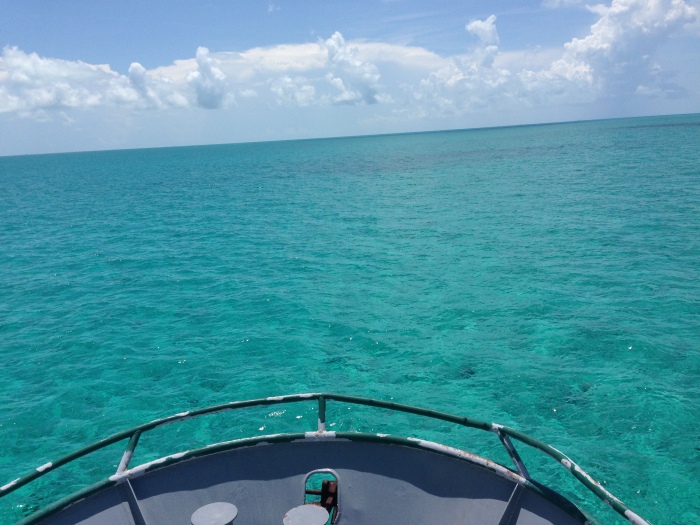 In the middle of the night, around 2 AM, the music stopped and the skies cleared and the milky way quietly stepped out into the night sky. I fell asleep after ogling, but- hey- wait, is that a rain drop? Yeah it is and – wait- another – CRAP. In a matter of moments, I was tumbling out of my hammock and drenched. Kleenex-in-a-full-sink soaked, fumbling with my knotted hammock. I shivered down the ladder and turned the corner to run into two younger guys, laughing at my sodden state, and then down past the older men still playing dominoes at 3:30 in the morning who snickered, “hey girl, you lookin’ a little damp!” and I quipped that I’d just gone for a quick swim. I caught a bit of a cold, which thankfully didn’t last.

On the ride back from Cat Island (the trip on Cat is chronicled in other posts), the boat ended up leaving the dock a bit before 5 AM, but Amelia, Margot and I had been sleeping in a cabin since midnight. We sailed past the Exuma cays, and smaller islands. I waved a happy hello to the southern tip of Eleuthera and made something of a promise to get back to the Cape soon. It was a sunny ride where we snacked, drank, and read. I attempted some use of sign language with one of the deaf deck hands – it went well, discussing deaf culture in the Bahamas and the Mail Boat, until he started asking if I was married/liked black guys and offering to marry me/buy me nice things etc. He was very nice, but I politely declined. Unbeknownst to him, I’d just been reading bell hooks and wasn’t quite in the mood.

After 19 hours on the boat, we made it back to Nassau. I collapsed in bed and dreamed about packing to return to the states.