To the West of Tokyo, past hamlets nestled into the Japanese Alps on curving roads and rice patties strung alongside kilometers of electric cable, the Ishikawa Peninsula juts into the Sea of Japan. The rice patties that made the region rich from the 16th to 19th centuries sprawl for miles until they step delicately down into the ocean, interrupted only by the small towns tucked along the coastline. The salt and rice fields, built up and maintained by human hand for centuries, are embedded into local landscape and culture. Now, this model for human-“nature” interaction is being explored by the UN as a method for providing resilient ecosystem services in the face of global biodiversity loss. Locally, the terms satoyama and satoumi describe sets of local ecosystems that provide necessary ecosystems services, and the human constructions that enable access to those resources. For the next two weeks I’m exploring the sites of the Hoku-Shinsetsu cluster from the UNs Millenium Assessment sub-regional report. They’re not reefs per se, but they are absolutely constructed coastal environments. I already know I’m not going to have enough time here.

Satoyama is a Japanese term for mosaic landscapes of different ecosystem types including secondary forests, agricultural lands, irrigation ponds, and grasslands, along with human settlements.  These landscapes have been formed and developed through prolonged interaction between humans and ecosystems, and are most often found in the rural and “periurban” areas of Japan. It is estimated that satoyama comprises more than 40 percent of Japan’s total landmass (Ministry of the Environment, Japan, 2001). In Ishikawa Prefecture, where I write from, it accounts for more than 60–70 percent of the total prefectural land area (Ishikawa Prefecture, 2004). Hurtling along the countryside, what many guidebooks call “the real Japan” is this precise puzzle of town and quietly manicured landscape.

Etymologically, human cultivation is central to satoyama. Satoyama sites  serve both material and symbolic functions, providing wood, water, and food as well as a shorthand for the productive or positive interaction of the human and environmental. Indeed, even the kanji for satoyama is layered with mutalism and interaction, literally written as 里 “village” and 山 “mountain”, the symbol for village made up of “rice paddy” and “soil.”

While satoyama as a concept emerged in the later 17th Century, the term satoumi was coined only recently to explicitly represent the coastal marine ecosystems used in fishery production and livelihoods manipulating seashore, tidal flats, seaweed beds and grounds. Dr. Tetsuo Yanagi, now operating out of Kyushu University, pulled the term together in 1997/8 to represent “coastal areas where human interaction has resulted in a high degree of productivity and biodiversity, and where a deep relationship between human life and traditional culture has led to the coexistence of humans and nature.”
The Ishikawa Peninsula is only recently affiliated with the satoumi term. Dr. Yanagi originally collaborated with researchers, policy makers, and fishermen in the Seto Inland Sea area. But when the Japanese Ministry of the Environment initiated the Satoumi Creation Project in 2008, Ishikawa’s Noto Peninsula was one of the 6 pilot projects that will inform the national Satoumi Manual, according to reports from the UN.

Satoumi is an organized, managed response to climate change and long-term adaptation in the name of environmental and cultural resilience. Quick, call the buzzword police. I don’t know, yet, if it’s about preserving culture through ostensible ecological preservation or the other way around – I have a hunch it’s the former. Satoumi and satoyama aren’t just about preserving lifestyle or ecosystems services, but also an embedded anxiety about the erosion of traditional Japanese culture. Are we preserving a human lifestyles or life writ large? This remains a central concern of resilience literature, concerned that we’re creating resilience neoliberal economies rather than healthy socio-ecologies. What distinguishes satoyama, however, is the potential for “traditional and cultural constructions such as shrines and temples work as an anchor to help people appreciate intangible and tangible cultural services, linking different services to specific locales across the Noto Peninsula.” (Hashimoto et al. 2014) One UN representative dismissed describing satoyama as pastoral romanticization of traditional agriculture per se; instead she attributes the state promotion of satoyama/satoumi to a general trend in conservation recognizing human manipulation of the environment (MacDonald 2011). However much we are in murky waters, the cultural component remains central to satoyama as a term and as a government priority.

So far my experience of Noto-cho and local conceptions of satoumi are all about human use. You ask what satoumi is and locals point to the sea over their shoulder. “Our ocean,” one restaurant owner supplied. “Our fish, our nori, our homes.” The FAO has designated Noto an agricultural heritage site for both local methods of food production and the lifestyles generated off/out of that agriculture. Places like Ishikawa are designated as heritage sites to prevent what the FAO calls and “overemphasis on productivity by modern agriculture that resulted in environmental problems” and the “bad effects of modernization.” (FAO 2002) The more I think about this the less I know what to think about it, given that the agricultural methods being preserved were always about productivity. Even rice fields require a mechanic understanding of local ecologies, the notion that you can manipulate local ecological processes for human benefit. 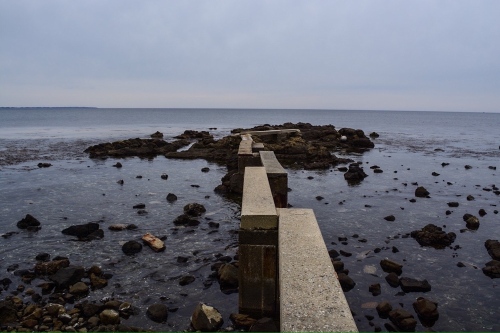 Ishikawa is one of the most beautiful places I’ve ever been. This is in part because it reminds me of Portland, all evergreen and blue-grey, and a bit of Monterey too. Craggy cliffs drop into crystal clear sea, which in turn opens up on to the Japanese Alps. I suppose my questions here are more about ownership and responsibility and management than they are aesthetics and design. Fine by me. I wish my Japanese was good enough to pick apart people’s relationship to macro-geological systems; do you think about the earth differently when it is so often violent here, between the tsunamis and the earthquakes? Are humans on the edge or deeply persistant? If anyone understands my jumbled Japanese well enough to answer, I’ll let you know.
Love,
R
p.s. In life, I am rolling along. Medical issues aside (I’d never heard of Dennie Morgan Lines but now I look even less my age), budget anxieties aside (whoops), utter panic about my future momentarily suspended, I am in a place in the world I love trying my hardest to engage my project. Speaking some Japanese. Trying to be brave. Trying to find stability and the unexpected simultaneously. Sending good thoughts and worry home every day. Loving people is dangerous.
Bibliography
Hashimoto, Shizuka, Shogo Nakamura, Osamu Saito, Ryo Kohsaka, Chiho Kamiyama, Mitsuyuki Tomiyoshi, Tomoya Kishioka, Mapping and characterizing ecosystem services of social-ecological production landscapes: case study of Noto, Japan, Sustainability Science, Vol 10:2, April 2015, pp 257-273
Indrawan, Mochamad, Mitsuyasu Yabe, Hisako Nomura, Rhett Harrison, Deconstructing Satoyama – the socio-ecological landscape in Japan, Ecological Engineering, Vol 64, March 2014, pp 77–84, doi:10.1016/j.ecoleng.2013.12.038
Iwata, Yuuki, Takakazu Yumoto, Yukihiro Morimoto, Can Satoyama Offer a Realistic Solution for a Low Carbon Society? Public Perception and Challenges,  Designing Low Carbon Societies in Landscapes, pp 89-108, 03 April 2014